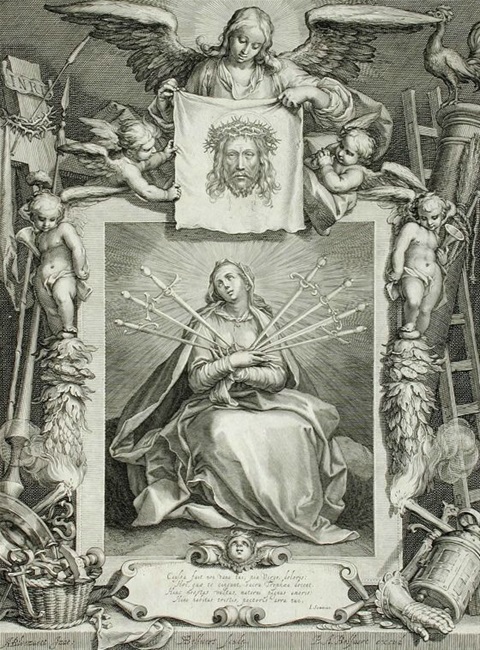 A few considerations on the Sorrowful & Immaculate Heart of Mary

The MARTYR of Martyrs

(Taken from the Glories of Mary, by St. Alphonsus Ligouri.)

It cannot be doubted that being more enlightened by the Holy Spirit than all the prophets, Mary better comprehended, than they the predictions concerning the Messias, which they recorded in their holy Scriptures. Precisely this the angel revealed to St. Bridget. Whence, as the same angel declared, the Virgin knowing how much the incarnate Word was to suffer for the salvation of men, even before she became his mother, and compassionating this innocent Saviour, who was to be so cruelly put to death for crimes not his own, she commenced, from that time, her great martyrdom.

Her grief afterwards increased immeasurably when she was made mother of this Saviour. So that at the painful thought of all the sufferings which her poor Son was to endure, she indeed experienced, says Rupert the Abbot, a long martyrdom a martyrdom continued through her whole life. And exactly this was signified by the vision which St. Bridget had at Rome, in the church of St. Mary Major, where the blessed Virgin appeared to her with St. Simeon, and an angel, having a sword which was very long and red with blood; by which was prefigured the long and bitter grief that pierced the heart of Mary during her whole life. Whence the above-named Rupert puts into the mouth of Mary the following words: Oh redeemed souls and my beloved children, do not pity me only for that hour in which I saw my dear Jesus dying in my presence, for the sword of sorrow, predicted to me by Simeon, pierced my soul during my whole life; when I was giving suck to my Son, when I was warming him in my arms, I already saw the bitter death that awaited him; consider then what long and cruel sorrows I must have endured.

Wherefore Mary might truly say in the words of David: My life is wasted with grief and my years in sighs (Ps, xxx. 11). My sorrow is continually before me: My life was wholly passed in grief and tears; for my grief, which was compassion for my beloved Son, never departed from before my eyes, seeing, as I did, continually the sufferings and death that he was one day to endure. The divine mother herself revealed to St. Bridget, that even after the death and ascension of her Son into heaven, the memory of his passion, whether she ate or worked, was deeply impressed and ever recent in her tender heart. Taulerus therefore says, that Mary passed her whole life in perpetual sorrow; for her heart was always occupied with thoughts of sadness and of suffering.

So that time, which usually mitigates the sorrows of the afflicted, did not relieve Mary; nay, time itself increased her sorrow, for as Jesus increased in years, on the one hand, he continually showed himself more lovely and amiable; and on the other, the time of his death was ever drawing nearer, and grief at having to lose him on this earth, continually increased in the heart of Mary. As the rose grows up among thorns, said the angel to St. Bridget, so the Mother of God advanced in years in the midst of sufferings; and as the thorns increase with the growth of the rose, thus this rose selected by the Lord, Mary, as she increased in age, was so much the more pierced by the thorns of her dolours.

The holy Abbot Arnold Carnotensis says, that whoever bad been present on Calvary at the great sacrifice of the immaculate Lamb, when he was dying on the cross, would have there beheld two great altars, one in the body of Jesus, the other in the heart of Mary: for there, at the same time that the Son sacrificed his body in death, Mary sacrificed her soul in compassion.

All those scourgings, torments, thorns, nails, and the cross, which tortured the innocent flesh of Jesus, entered at the same time into the heart of Mary to complete her martyrdom. He in the flesh, she in the heart suffered, writes St. Amadeus. So that as St. Lawrence Justinian says, the heart of Mary became as it were, a mirror of the agonies of her Son, in which were seen the spitting, the scourging, the wounds, and all that Jesus suffered.

And St. Bonaventure remarks, that these wounds which were scattered all over the body of Jesus, were all united in one heart of Mary. The Virgin, then through compassion for her Son, was scourged, crowned with thorns, insulted, and nailed to the cross. Whence the same saint considering Mary on Mt. Calvary, where she was present with her dying Son, asks of her: Oh Lady, tell me where you then stood? Perhaps only at the foot of the cross! Might I not rather say: thou wast on the cross itself crucified with thy Son?

The Blessed Virgin Mary complained to St. Bridget, that very few pitied her, and most lived forgetful of her Sorrows. “I look around upon all who are in the world, if perchance there may be any to pity me, and meditate upon my sorrows, and truly I find very few. Therefore, my daughter, though I am forgotten by many, at least do not thou forget me; behold my anguish, and imitate, as far as thou canst, my grief.”

In order to understand how much the Virgin is pleased by our remembrance of her dolors, it is sufficient to relate, that in the year 1239, she appeared to seven of her servants, who then became the founders of the order of the Servants of Mary, with a black garment in her hand, and told them that if they wished to please her, they should often meditate upon her dolors; and therefore she wished, in memory of them, that they would hereafter wear that garment of mourning.

And Jesus Christ himself revealed to the Blessed Veronica Binasco, that he takes more pleasure, as it were, in seeing his mother compassionated than himself; for thus he addressed her: “My daughter, the tears shed for my passion are dear to me; but loving with so great love my mother Mary, the meditation of the dolors which she suffered at my death is more dear to me.”

Sorrowful and Immaculate Heart of Mary,

pray for us who have recourse to thee.